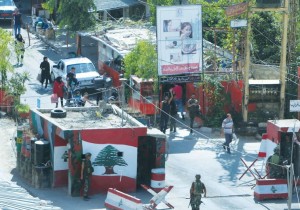 Lebanese media quoted security officials as saying that Abu Nidal Shihada, an administrative official at the Palestinian National Security Forces, was assaulted at Ain al-Hilweh refugee camp located near the city of Sidon, like reported by presstv.com.

The attackers shot Shihada in the leg after beating him, the sources said, adding that he was transferred to a nearby Palestinian Red Crescent clinic.

Palestinian security forces inside the camp launched an investigation into the incident, which is the second of its kind in a single week.

On January 29, the Palestinian embassy’s security officer Ismail Sharrouf survived an assassination attempt in Sidon. He suffered injuries when his car came under fire by unknown attackers.

The camp has been the scene of violent clashes between members of the Jund al-Sham militant group and the Fatah movement, the Palestinian Authority (PA)’s ruling party, over the past few months.

In September, the Lebanese army confirmed that it had arrested a high-ranking commander of the Daesh Takfiri terrorist group at the site. Military sources said the terrorist was planning to carry out a series of attacks aimed at “inflicting the largest number of casualties and hitting the Lebanese economy and tourism sectors.”

Lebanon has been suffering from the spillover of militancy in neighboring Syria. Terrorists have been active in Lebanese areas situated close to the Syrian border.

Sunday’s attack comes about a week after the Higher Palestinian Security Committee presented a security roadmap to the Lebanese army to help restore security to the camp.