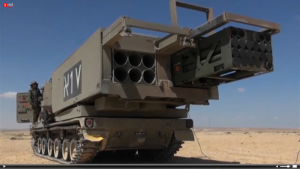 Israeli armed forces are considering upgrading their surface-to-surface missile system after Hizballah reportedly developed its anti-aircraft capability in Lebanon, like reported by alaraby.co.uk .

The Artillery Corps are considering upgrading its Romach rockets, which have a range of around 35km, to rockets capable of reaching 300km or more.

“Israel sells this [capability] all over the world, just not here,” one anonymous official told Israeli daily Haaretz.

“I think there is agreement that we will need to equip ourselves with this. The question is only the amount.”

Israel’s air force are reportedly unhappy about the issue, arguing that airstrikes should fall under their remit.

Hizballah has been displaying its military might in recent months, showcasing a range of heavy machinery including anti-aircraft systems, at a military parade in Syria’s Homs region in November.

The paramilitary resistance group have long held anti-aircraft guns, but these were upgraded once Hizballah joined the war in Syria in favour of an advanced radar system which can lock on to modern aircraft.

The two main rockets in consideration are both Israeli-made, namely the ‘Extra’ rocket, designed by IMI Systems and the ‘LORA’ missile, designed by Israel Aerospace Industries.

According to their respective websites, both missiles are highly precise missiles which can hit targets within ten minutes of a decision.

By contrast, Hizballah reportedly owns a large number of short-range Grad and Katyusha rocket systems, like those used in Syria, in addition to the medium range Iranian Fajr missile.