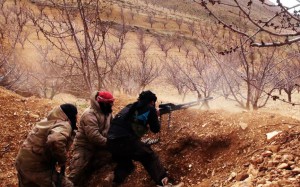 A new surge of violence hit the Lebanese district of Arsal near the Syrian border, as heavy clashes broke out on Tuesday between Islamic State (ISIS) militants and the al-Qaeda splinter group Jabhat Fateh al-Sham.

ISIS initiated the clashes by attacking a checkpoint for the Fateh al-Sham in the Malahi neighbourhood of Arsal, using mortar shells. Scores of Fateh al-Sham fighters were killed in the attack, and ISIS eventually took over the checkpoint, local sources reported on Tuesday.

At least 15 ISIS militants were killed at the hands of Fateh al-Sham fighters, before the group took over the ISIS security checkpoint in al-Shir.

Both ISIS and Jabhat Fateh al-Sham [previously al-Nusra Front] hold positions in the Arsal region and al-Qaa heights near the Lebanese-Syrian border.

In August 2014, ISIS militants attacked a Lebanese Army base and took dozens of soldiers as hostages, nine of them are still held by the militant group.