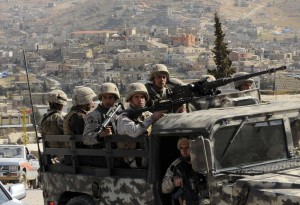 Islamic State ‘emir’, Ahmed Wahid al-Abed, was killed in a bomb explosion in the southeastern town of Arsal, LBCI reported on Tuesday.

Al-Abed, a Syrian hailing from al-Jarajir town in al-Qalamoun, was killed in a bomb explosion in the outskirts of Arsal, it added.

Militants from IS and Fateh al-Sham Front — formerly al-Qaida’s Syria affiliate al-Nusra Front — are entrenched in rugged areas along the undemarcated Lebanese-Syrian border and the army regularly shells their posts while Hizbullah and the Syrian army have engaged in clashes with them on the Syrian side of the border.

The two groups briefly overran the town of Arsal in August 2014 before being ousted by the army after days of deadly battles.

The retreating militants abducted more than 30 troops and policemen of whom four have been executed and nine remain in the captivity of the IS group.