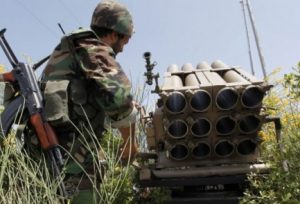 Iran has set up several rocket and weapons manufacturing facilities for Hezbollah in Lebanon, a senior commander in the Iranian Revolutionary Guard told Kuwaiti newspaper Al Jarida on Monday.

According to the report, the decision to construct local production sites was made following a series of alleged Israeli strikes against convoys delivering Iranian weapons to the Lebanon-based Shiite terrorist group via Sudan and Syria, like reported by israelhayom.com.

Foreign media often attributes strikes on weapon shipments in the region to Israel, which does not comment on such issues.

“Iran has set up factories for the production of rockets in Lebanon and for Hezbollah weapons,” Al Jarida quoted the unnamed officer as saying.

He said the Revolutionary Guard has set up a special department to train Lebanese and Hezbollah “experts” in the production process for the specific purpose of avoiding having arms shipments destroyed by Israel during transport.

The facilities have all been built underground to protect them from Israeli airstrikes, he said.

Hezbollah is Iran’s main proxy in the region and the Islamic republic is its main sponsor. Hezbollah operatives, alongside Iranian Revolutionary Guard troops, are fighting in the Syrian civil war to secure the regime of Syrian President Bashar Assad.