You are here: Home / Mediterranean / Lebanon: Iran-backed Hezbollah has ‘arms depot’ in Beirut 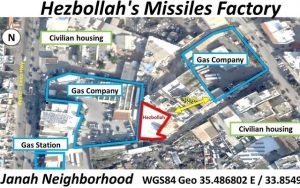 Israeli Prime Minister Benjamin Netanyahu accused the Lebanese Iran-backed Hezbollah party of maintaining a “secret arms depot” in a residential neighborhood of Beirut, warning it could cause another tragic explosion in the Lebanese capital, like reported by aawsat.com.

In an address to the UN General Assembly on Tuesday, Netanyahu showed maps purportedly showing the missile depot’s location next to a gas station and residential housing. He also showed what he said was a picture of the entrance to the depot.

“Here’s where the next explosion will take place, right here,” he said.

Addressing the Lebanese people, he said: “You’ve got to act now, you’ve got to protest this, because if this thing explodes, it’s another tragedy. … You should tell them, ‘Tear these depots down.’”

Last month, a warehouse filled with nearly 3,000 tons of ammonium nitrate exploded in Beirut’s port, killing nearly 200 people, wounding thousands and causing widespread destruction in the capital. The ammonium nitrate had been stored there for several years with the knowledge of the country’s highest authorities, including the president and prime minister.

No one has yet been held accountable for the blast, which appears to have been triggered by an accidental fire.