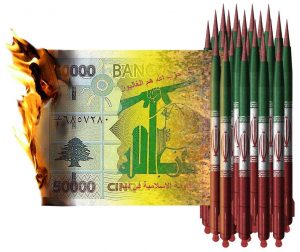 Hizbullah is passing through a financial crisis and is calling on its supporters for financial contributions after Iran shrank down financial aid it provides for the party, the Kuwaiti al-Anbaa daily reported.

Billboards have spread in the southern suburbs of Beirut calling upon citizens for financial donations for the benefit of Hizbullah under the banner of “training a mujahid”, said the daily.

The step was interpreted by informed political circles as a “reflection of the suffocating financial crisis experienced by the party because of the reduction of Iranian financial aid and its involvement in regional conflicts in Syria, Iraq, Yemen, and Bahrain, in addition to the results of US and international sanctions imposed on it recently.

The crisis has led Hizbullah to launch “this aid campaign to get contributions from wealthy Shiites, supporters, politicians, businessmen and merchants in various Lebanese regions,” according to the daily.