You are here: Home / Analysis / Lebanon: Hezbollah’s use of recent attack on protests is calculated risk 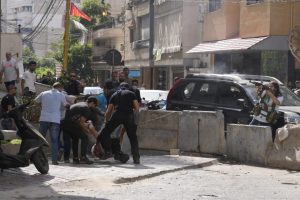 Hezbollah has sought to capitalize on the killing of several people in Beirut last Thursday to try to mobilize anger against a Christian Lebanese leader named Samir Geagea, like reported by jpost.com.

This leads to questions about what Hezbollah’s real plan is. Within a day of the attack, the pro-Hezbollah social media was already labeling Geagea responsible and various graphics appeared comparing him to fascists and reminding Lebanese of the civil war that pitted Christian fighters like Geagea against Muslims.

How did Hezbollah know to latch onto this narrative so quickly? It appears that Hezbollah wants to exploit the chaotic scenes last week to claim that they know who shot at protests.

However, the actual events are more unclear. A video emerged showing Lebanese soldiers shooting at least one civilian. Hezbollah members arrived quickly with arms to begin shooting at random buildings during the protest in Beirut. The protest was a Hezbollah provocation designed to remove a judge investigating an explosion last year in Beirut.

This means that some supporters of Hezbollah may have been looking for an excuse to try to sideline or target Geagea. Why him? Because targeting a Christian leader who opposes Hezbollah is one way to divide the opposition in Lebanon.

While some Christians have sided with Hezbollah, such as Michel Aoun, others back the Lebanese Forces, the group led by Geagea. Many Sunni Muslims also back Saad Hariri and others who oppose Hezbollah. This has created political deadlock for years.

Hezbollah wants to remind Lebanon that it is the group with the most weapons and armed members. That is why it has bragged of having some 100,000 fighters. It also wants to use this incident to create a new narrative about having “martyrs” to pretend that it is the victim.

This is the classic victim-perpetrator model, where the more one is a perpetrator, the more one claims also to be a victim and be “forced” to perpetrate crimes. Hezbollah has entered this cycle because of its strength in Lebanon today.

The question for Hezbollah is whether it will continue down a road of sectarian division and trying to create a kind of a cause that could unite its followers against Geagea and lead to violence, or whether it will tone down the rhetoric and stop the incitement.