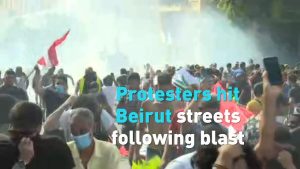 Beirut’s ammonium nitrate explosion earlier this month has further exposed Hezbollah to public anger, with some Lebanon observers predicting a gloomy road ahead for the U.S.-designated terror group in the aftermath of the devastating event, like reported by voanews.com.

The blast at the port from the detonation of 2,750 tons of ammonium nitrate on August 4 killed more than 200 people and injured thousands of others. The Hezbollah-backed government resigned amid mass demonstrations demanding radical reforms in the government.

Experts say Hezbollah is now facing a major challenge to protect its influence and shape the country’s future government because many protesters see it as a major obstacle to eradicating corruption in the country’s political system.

Rami Khouri, a senior public policy fellow and journalism professor at the American University of Beirut (AUB), told VOA, “Hezbollah don’t want to run the country, and they don’t want to see it collapse into chaos. They will have to use their capabilities to engage … both with the protesters and the sectarian elites. This is a big challenge that they never faced before.”

He added that many people in Lebanon have criticized Hezbollah publicly in the past but rarely pushed to be rid of its leader, Hassan Nasrallah.

However, after the blast, as protesters demanded justice and a transparent investigation, they set up makeshift gallows with cardboard effigies of Lebanese leaders, including Nasrallah.

Some local reports claim that the explosion at the port occurred from a weapons warehouse belonging to Hezbollah, which is backed by Iran. Nasrallah denied those accusations, calling the charge an “exceptional injustice.”

Lebanese President Michel Aoun says a government investigation into the explosion has not yet determined the cause and dismissed allegations of Hezbollah’s responsibility.

Many families of the victims and protest activists want an international investigation of the incident.

Jad Yateem, a Lebanese activist and journalist, said that Lebanese protesters do not trust the outcome of any investigation from the government, fearing a cover-up if the probe finds the blast was the result of negligence by authorities.

“We are calling for a transitional government … accompanied by an international fact-checking committee to reveal what caused the blast,” Yateem told VOA.

“Hezbollah is involved whether the stored ammonium nitrate belonged to the party, or either by being part of the corrupted government,” he said, adding that the protesters want a transitional government to oversee a new electoral law that could reshape the government.

Hezbollah, described as a “state within a state,” for using political leverage in the government to protect its interests, is viewed as a major cause of the government’s inability to fight its worst economic crisis since the 15-year civil war ended in 1990.

Mass demonstrations began in October 2019, with the protesters demanding an overhaul of the ruling political class and a fix for its economy. Lebanese opposition groups and activists blame the crisis on mismanagement of public resources and corruption by consecutive governments leading to the current Hezbollah-led government.

As Lebanon seeks aid and assistance from the international community, some experts say Lebanon’s political party backers see this as an opportunity to reshuffle loyalties.

“Out of disaster opportunity arrives, this pushes Lebanon to the void,” David Daoud, research analyst at United Against Nuclear Iran (UANI) told VOA.

“If Iran appears like the good guy here, it will either win the sympathy of the Lebanese street broadly or at least hold the sympathy of Hezbollah’s base,” said Daoud, who focuses on Hezbollah and Lebanon. He added that Hezbollah is trying to portray Lebanon’s myriad of crises not as a product of mismanagement but rather because of the U.S. sanctions against the group.

After the blast, people in Lebanon volunteered to clean the streets, clear the rubble and help those who had lost their homes. Aid groups in Lebanon, saying they don’t trust the government to distribute aid effectively, have called on international donors to channel assistance directly to hospitals and local organizations.

Chrystine Mhanna, communication and advocacy officer at the Lebanese Center for Human Rights (CLDH), said that they are coordinating efforts with other NGOs to establish help centers in different areas of Beirut to assist those who lost their homes. Since the blast, the CLDH, which monitors human rights violations, has expanded to provide legal assistance to people who have lost their homes.

“Emergency response teams took a long time to arrive at the site,” she told VOA. She added, “There was no sufficient information or direct assistance provided to the victims. Hospitals dealing with coronavirus found themselves under pressure while providing medical aid to survivors from the blast.”

Mhanna, whose office in Beirut was untouched by the blast except for shattered windows, said “The government is absolutely absent.”