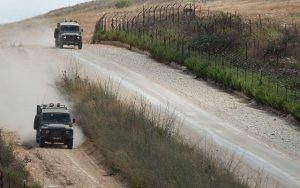 Hezbollah has threatened to open fire at IDF soldiers if Israel does not halt the construction of a barrier along the Israel-Lebanon border, Hadashot TV reported.

Israel has been building the obstacle — made up of a collection of berms, cliffs and concrete barriers — for a long time, but it has only now reportedly angered the Lebanese terror group, which last fought Israel in the Second Lebanon War in 2006.

The message was delivered to Jerusalem via the United Nations Interim Force in Lebanon (UNIFIL), the report said. The UN force, fearing a possible escalation, passed the message on to the US and French ambassadors, who updated the Prime Minister’s Office on the matter.

However, the Israeli government was unimpressed, and responded with a threatening message of its own, the report said. Israel said it was acting in its own sovereign territory in accordance with a Security Council resolution adopted after Israel withdrew from Lebanon in 2000.

The section Israel is now constructing, on the northern side of the border fence, is angering Hezbollah. However, in parts, the fence is built inside Israeli territory.

Israel does not intend to halt the construction, Jerusalem said, and Hezbollah will “pay dearly” if it tries to inflame tensions. “Israel’s reaction will be strong and painful,” sources in Israel’s security establishment were quoted as saying.

Earlier on Monday, a Hezbollah lawmaker struck back against a rare op-ed published in Lebanese media by an Israeli army spokesperson, saying his warnings of Iran manufacturing rockets in the country were “provocative nonsense” and that Hezbollah was now in a position to destroy the Israeli army.

In response, Hezbollah MP Mohammad Raad, writing in Al-Hewar Al-Motamaden, one of the Lebanese blog sites where Manelis published, said, “Israel should not be unmindful and engage itself in a war that would destroy it… Hezbollah has today become stronger and has what it takes to destroy the Israeli army,” he wrote.

“Israel has become isolated internationally and regionally. Its media spins are a cover for its inability to show itself as strong,” he added.