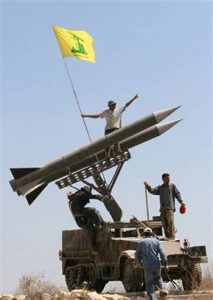 Reports have recently begun to appear again in the Lebanese press regarding military activity by Hizbullah south of the Litani River, on the Lebanon-Israel border, in violation of UN Security Council Resolution 1701, and on the organization’s increasing strength in the last few years, especially due to its military involvement in the Syria war, like reported by memri.org.

The Lebanese press reported, inter alia, that Hizbullah has tunnels on the Israeli border and that it possesses advanced weapons provided by Iran and Syria that disrupt the balance of power vis-à-vis Israel. It has also been reported that Hizbullah is cooperating with Hamas’s military wing, the ‘Izz Al-Din Al-Qassam Brigades.

The reports on Hizbullah’s military activity in South Lebanon are corroborated by the organization’s own statement, from January 17, 2017, that its operatives had found the wreckage of an Israeli drone that had crashed near the border two days earlier and were examining it “in a safe location.”

The following are excerpts from the reports on Hizbullah’s activity in south Lebanon:

Ibrahim Al-Amin, board chairman of the pro-Hizbullah Lebanese daily Al-Akhbar, wrote in a January 24, 2017 editorial that Hizbullah’s military, security and intelligence capabilities have grown in the recent years. This, he said, is manifest in the organization’s ability to lay down the rules of the confrontation with Israel; in the extensive and varied arsenal of weapons it possesses, provided by Syria and Iran, which includes ‘game-changing’ weapons; in its presence not only on the Lebanon-Israel border but on the Syria-Israel border; in its transformation into a major player in Syria, Iraq and Yemen which also has considerable influence in other locations and sensitive arenas in the Arab and Muslim world, and in its ongoing cooperation with Hamas’s military wing. Amin implied that the Israeli assessment that Hizbullah is capable of firing 1,500 missiles a day underestimates the organization’s true capabilities.

He wrote: “Reexamining the arena of direct confrontation [between Israel] and Hizbullah, we notice something that greatly worries the enemy’s leadership: [that] the enemy has failed in his vigorous efforts to change the rules of the confrontation with the resistance [i.e., Hizbullah] along the border front. [Israel’s] targeted killings of senior resistance operatives compelled Hizbullah’s leadership to [present a] scale of increasingly harsh retaliatory measures, up to and including readiness to enter an all-out confrontation. This forced the enemy to avoid direct military action on Lebanese soil, including localized operations.

“The enemy [then] decided to shift [its attention] to the Syrian arena and exploit the crisis there to target the capabilities of the resistance, since [the enemy] quickly realized that Hizbullah’s involvement in the Syrian crisis laid [both] the Syrian and the Lebanese border [with Israel], as well as the Syrian army’s weapons [arsenal], wide open to Hizbullah. This allowed a vast supply of advanced, state-of-the art weapons of various kinds, including weapons provided by Iran, to flow into Hizbullah’s depots. The enemy decided to bomb military convoys or [arms] depots inside Syria that allegedly belonged to the resistance. [But the number of] airstrikes, both those that were reported and those that were not, never exceeded an average of five strikes per year since 2011, and the enemy knows that dozens if not hundreds of convoys managed to [get through and] bring the necessary [weapons] to the resistance bases in Lebanon…

“In practice, Israel reads the map and realizes that Hizbullah’s weapons arsenal has steadily grown, and is now several times larger than it was in 2006, and that the kind of weapons that the enemy tried and is still trying to prevent the resistance from acquiring – namely, what Israel calls ‘game-changing’ weapons – is available to it in great amounts. Moreover, the enemy sees that Hizbullah, whose activity was once confined to the front along the Lebanese border, is now present along the [entire] northern front of occupied Palestine [i.e., also along the Syrian border], and has more room to maneuver than it had before. This, in addition to the extraordinary abilities it acquired in the course of the Syria war… In the security confrontation with the takfiri streams, the resistance apparatuses acquired considerable skills in the domain of intelligence, including abilities it did not have 10 years ago, [and] this in addition to the development of the resistance’s military intelligence [apparatus] – [all of which] which increases the enemy’s apprehension.

“The enemy now feels that Hizbullah’s role in the region has grown, after it became a major player in Syria, Iraq and Yemen, with vast influence in other parts of the Arab and Muslim world [as well]. Hizbullah can influence sensitive arenas that have great [importance] for the rival axis, [an axis] which includes Arab, Israeli and Western elements. Moreover, none of the manifestations of sectarian strife [between Sunnis and Shi’ites] have harmed Hizbullah’s ability to cooperate with the resistance forces in Palestine, including the ‘Izz Al-Din Al-Qassam Brigades, Hamas’s military wing…

“Will [the enemy] once again flee towards an all-out war [with Hizbullah]? In this context, it is pertinent to draw the attention of friend and foe alike [to the fact that] that Israel works hard to estimate the extent of Hizbullah’s rocket capabilities, but after every confrontation the results prove to be the opposite [of what it predicted]. In the July 2006 war, the resistance fired 4,300 rockets at Israel in 33 days. Now the Israelis say that [in the next confrontation], Hizbullah will fire about 1,500 rockets a day. These are the enemy’s estimates, and they are surely wrong!”

Al-Mustaqbal Daily: Hizbullah Has Forward Positions On Border With Israel, Including Tunnels

Another report on Hizbullah’s preparations for a confrontation with Israel appeared several days earlier, on January 18, 2017, in the Lebanese daily Al-Mustaqbal, owned by Lebanese Prime Minister Sa’d Al-Hariri, a prominent political rival of Hizbullah. This report indicates that Hizbullah operates south of the Litani River, in violation of UN Security Council Resolution 1701, which prohibits this. It says: “Hizbullah has concealed forward positions on the international border [between Lebanon and Israel], including tunnels it dug over 10 years ago, especially in the Al-Labouna area, south of Al-Naqoura. [This area] overlooks the Palestinian coast and the [Israeli] towns of Shlomi and Nahariya.”

These reports on Hizbullah’s activity in South Lebanon and its digging of tunnels join earlier reports on this in the Lebanese press that were mentioned in MEMRI reports. For example, on May 25, 2016, the pro-Hizbullah daily Al-Safir reported, in a main article marking the 16th anniversary of Israel’s withdrawal from South Lebanon, that Hizbullah operatives work day and night along the Israeli border, “conducting observations, preparing, and digging tunnels that cause the settlers and enemy soldiers to lose sleep.” The article also noted that, in the course of its fighting in Syria, Hizbullah encountered an enemy that excavates tunnels, after becoming accustomed to being the only one digging them, and that Hizbullah had taught other resistance fighters, particularly Palestinians in the Gaza Strip, the tunnel doctrine.

On October 8, 2014, the Lebanese daily Al-Akhbar, which is close to Hizbullah, reported that the organization had resumed operations south of the Litani and that its activity there resembled its activity in the region in 2000-2006.