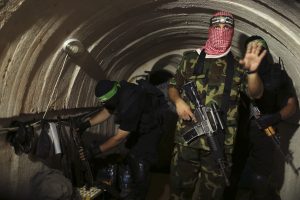 A new report released by the ALMA Center has exposed a large-scale inter-regional tunnel network belonging to Hezbollah, stretching across Lebanon and designed to allow the group to move personnel and weapons, like reported by jpost.com.

The report, titled “Land of tunnels” was released on Thursday by the center which researches security challenges facing Israel on its northern front.

According to the report authored by Major (res.) Tal Beeri, Hezbollah began its tunnel project after the Second Lebanon War in 2006 with the help of the North Koreans and Iranians and “is much larger than the Hamas ‘metro’ project in the Gaza Strip.”

The network supposedly connects the Beirut area, Hezbollah’s central headquarters, the Beqaa area used by the group as its logistical operational rear base, to Southern Lebanon. According to the report they allow for “hundreds of combatants, fully equipped, to pass stealthily and rapidly underground.”

The tunnels are also large enough for motorcycles, ATVs, and other small vehicles to move through them to allow for troops to maneuver from place to place “for the purpose of reinforcing defense positions or for carrying out an attack in a safe, protected, and invisible manner.”

The cumulative length of the network can be in the hundreds of kilometers and in one area stretches some 45 kilometers, connecting the area of Sidon to the Beqaa.

Beeri wrote that the tunnels are also used for artillery attacks, with the shafts opening for a short period of time before being immediately shut. These shafts are hidden and camouflaged and cannot be detected above ground.

The tunnels in Lebanon, which do not cross the border with Israel, are the same as the tunnels in North Korea.

The report stated that Hezbollah’s tunnel network was built with the assistance of a North Korean company called “the Korea Mining Development Trading Corporation,” a company that specializes in the development of underground infrastructure. The actual construction of the tunnels was done by Hezbollah’s Jihad Construction Foundation.

In 2018 the IDF launched Operation Northern Shield to discover and destroy all cross-border tunnels dug by Hezbollah into northern Israel. Though the military said that it has found and destroyed six such tunnels.

The destruction of their cross-border tunnels was a significant hit to the group, and according to the IDF, they haven’t tried to rebuild them since.