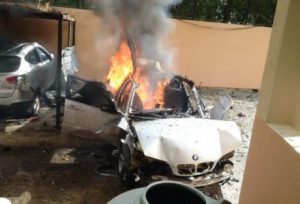 A bomb destroyed a car in the southern Lebanese city of Sidon on Sunday, wounding one person, security sources said.

Television footage from Sidon showed a column of smoke rising from an area near the eastern highway of the city.

The Lebanon 24 news website said the bomb that tore through a silver-colored BMW targeted Hamza Hamdan, a known Hamas operative.

Initial information suggested explosives had been planted under the car. It is unknown at this time whether Hamdan was the person wounded in the explosion, nor was any information given on the severity of his wounds.

Security forces cordoned off the site of the explosion in Sidon.

The mayor of Sidon told local media that the car was booby-trapped and that the bomb exploded as soon as the driver opened the door.