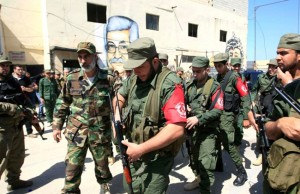 The joint Palestinian elite forces Tuesday implemented a security plan heralded as unprecedented in two areas of south Lebanon’s Ain al-Hilweh refugee camp, in an apparent effort to prevent the fragile security situation there from collapsing. As part of the plan, around 30 members of the joint elite forces entered the Tawari neighborhood of the camp, an area long viewed a security threat. The district is also considered a stronghold for some extremist armed groups that fall under the umbrella of Shabab al-Muslim, which includes Fatah al-Islam and Jund al-Sham.

The forces erected checkpoints at the entrance of the neighborhood and established patrols inside. The measures were implemented in a calm atmosphere and they mark the first time that the force has entered the embattled neighborhood since its inception in July 2014.

The Tawari neighborhood is adjacent to Taamir Ain al-Hilweh, another area of the camp thought to be used as a refuge for extremist groups. About 40 members of the elite forces were deployed in Tahtani Street in the Taamir area. The Lebanese Army is deployed 40 meters from where the forces erected checkpoints.

When the gunmen entered the area they were not met with any apparent armed presence. Traffic in the area was limited to school buses and some members of the neighborhood’s committee, who met with a delegation from the Higher Palestinian Security Committee.

Many residents in the camp welcomed the measures.

The Higher Palestinian Security Committee had decided to launch a security plan in the area over a month ago, but was unable to execute the plan until this week. The Committee, which supervised the security plan, is the body that oversees security forces in Palestinian camps across the country.

The measures came after several calls by the Lebanese Army to the Committee to deploy the forces in the Tawari and Taamir neighborhoods, especially after the killing of two members of the Hezbollah-linked Resistance Brigades since the start of April. The perpetrators are believed to be hiding in the Tawari neighborhood. The killings sparked fears that the security situation in Ain al-Hilweh would spin out of control.

Palestinian sources believe that the joint elite forces have succeeded in removing the aura of invincibility surrounding the militants holed up in the Tawari neighborhood. With the recent deployment, the psychological barrier which once divided the neighborhood from the rest of Ain al-Hilweh has been shattered.

Palestinian sources acquainted with the elite forces’ deployment in Tawari explained that the implementation of the plan had been delayed for two reasons.

First the Committee had to deal with Shabab al-Muslim, which outright rejected the plan due to a perceived media campaign against the Tawari neighborhood which accompanied the announcement of the measures. The argument between the Committee and the group exacerbated fears that tensions might escalate to a direct confrontation between the two groups in the camp.

The Higher Palestinian Security Committee had to choose one of two options: to take direct action and extend its authority over the Tawari neighborhood in spite of Shabab al-Muslim, or an indirect action involving negotiations with the group to find a middle ground.

The lack of preparedness on the part of some members of the elite forces also accounted for the delay.

Islamist factions, particularly Osbat al-Ansar handled the negotiation process indirectly through the Tawari neighborhood’s committee and later directly through negotiations with a representative from Shabab al-Muslim. Sources told The Daily Star that mutual guarantees were given from both sides in order for the security plan to succeed.

Shabab al-Muslim guaranteed that no one would obstruct or prevent the forces from being deployed in the neighborhood. It was also agreed that a recently established investigative committee would look into the recent spate of killings in the area.

Decisions, based on a report by the investigate committee, would be taken unanimously by the all factions represented in the Higher Security Committee.

Some also said they believed Hezbollah’s gains in Qalamoun and the blows it dealt to the Nusra Front facilitated the implementation of the security plan.

Shabab al-Muslim expressed its support for the security plan and the erection of checkpoints in a statement, adding that its approval came because they had been consulted.

“We will never delay something that benefits the Muslims of the camp, even if it is at the expense of ourselves,” the statement read.

Sheikh Abou Sherif Akl, Osbat al-Ansar’s spokesperson, who played an important role in the dialogue, explained that Shabab al-Muslim representatives expressed their keenness to preserve security in the camp.

The move was also hailed by Sidon MP Bahia Hariri, who said that the deployment of the forces indicated the willingness of Palestinians and Lebanese in Sidon to preserve stability in Ain al-Hilweh.