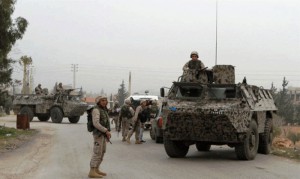 The Army Intelligence succeeded to arrest 11 armed persons, among them one of Daesh’s top leaders, the one responsible for booby-trapped cars and suicide bombers, Ahmad Youssef Amon (aka The Sheikh), the NNA correspondent in Arsal said.

Amon, who got injured in the clashes that led to his arrest, was transported on a helicopter to the hospital for treatment.

During the raids, the Army seized large amounts of weapons and explosive belts.