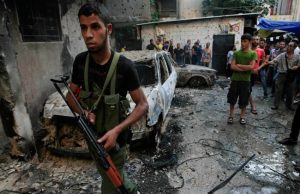 The fighting began on Thursday after a leader of an armed faction sympathetic to the Islamist Badr group fired at the headquarters of a joint security force comprising the main Palestinian factions.

In April seven people were killed in clashes in the camp between the Badr group and the joint security force after it deployed there.

The son of the armed group’s leader was killed in Thursday’s clashes and a member of the security forces died from wounds on Friday morning, the Lebanese National News Agency (NNA) said, another eight people were wounded.

The Palestinian security force commander called a ceasefire on Thursday night, but an explosion, accompanied by gunfire, was heard in the camp on Friday afternoon, the witness said.

Lebanon’s Palestinian camps, which date back to the 1948 war between Israel and its Arab neighbors, mainly fall outside the jurisdiction of Lebanese security services. There are some 450,000 Palestinian refugees living in 12 camps in Lebanon.