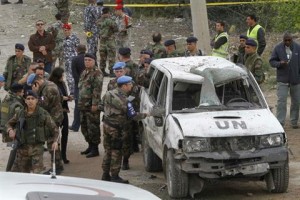 “Two UNIFIL patrols in the general area of Al Mansouri-Majda Zun (Sector West) were obstructed by groups of aggressive men,” the mission said in a statement.

“In separate incidents, civilians attempted to block the way of UNIFIL patrols and attacked the peacekeepers. While exercising utmost restraint, UNIFIL patrol vehicles had to push aside some civilian vehicles used as roadblocks in order to safely pull out from the locations,” it said.

“There were no injuries to U.N. peacekeepers, but severe damages were caused to UNIFIL vehicles,” the statement added.

UNIFIL was in immediate contact with the Lebanese army and is working with it to determine the circumstances and the cause of the incidents.

UNIFIL Head of Mission and Force Commander Maj. Gen. Michael Beary reiterated “the importance of UNIFIL’s safety and freedom of movement in its area of operations in south Lebanon, which is central to maintaining peace and stability in the area.”