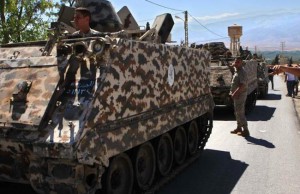 At least 10 men from the northeastern border town of Arsal have reportedly joined Syria-based Islamist militants fighting against Hezbollah along the border with Lebanon, according to a local Lebanese daily.

As-Safir newspaper Friday quoted sources as saying that Lebanese Army Intelligence has monitored more than 10 young men heading from Arsal towards the town’s outskirts over the past two days.

Arsal has been back in the headlines in recent weeks, with Hezbollah chief Sayyed Hasan Nasrallah warning that his party will take matters into its own hands if the Army does not drive out the militants entrenched in the rugged region around the town.

March 14 officials have criticized Hezbollah for its offensive launched alongside the Syrian army earlier this month to rid the border Qalamoun region of jihadi groups.

March 14, which backs Syria’s opposition, says only the Lebanese Army can protect the country’s borders and that Hezbollah’s actions in Syria endanger Lebanon.

Lebanon’s Army Commander Gen. Jean Kahwagi assured Thursday that political bickering over key security appointments would not affect the military’s will to confront terrorists along the border with Syria.