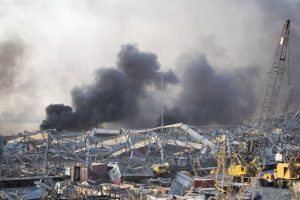 The lead investigator into the August blast at Beirut’s port that killed and wounded many people issued two arrest warrants Thursday for the captain and owner of a ship that carried thousands of tons of ammonium nitrate to Beirut seven years ago, the state-run National News Agency said according to egyptindependent.com.

Nearly 3,000 tons of ammonium nitrates stored at Beirut’s port exploded on August 4, killing 193, wounding about 6,500 and causing damage worth billions of dollars.

The news agency said judge Fadi Sawwan referred the case to the state prosecution that asked Interpol to detain the two Russian citizens.

NNA did not give the names of the two men but Boris Prokoshev was the captain who sailed the MV Rhosus from Turkey to Beirut in 2013. Igor Grechushkin, a Russian businessman residing in the Mediterranean island of Cyprus, bought the cargo ship in 2012 from Cypriot businessman Charalambos Manoli. Grechushkin has been questioned by police on request of Interpol’s Lebanon office in August.

More than two dozen people, most of them port and customs officials, have been detained since the blast which is considered to be one of the biggest non-nuclear explosions ever recorded.

The Rhosus set out from the Georgian Black Sea port of Batumi carrying 2,755.5 tons of ammonium nitrate destined for an explosives company in Mozambique. It made an unscheduled detour, stopping in Beirut on November 19, 2013.

In October 2014, the ammonium nitrate was moved into the port’s Warehouse 12, which holds impounded materials. The ammonium nitrate remained at the warehouse until it exploded while the Rhosus never left the port and sank there in February 2018, according to Lebanese official documents.