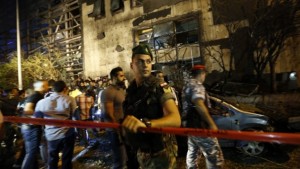 The arrests come two weeks after an attempted suicide attack at a cafe in a popular shopping district of the capital was foiled and the alleged attacker detained.

The suspects, a Lebanese and a Palestinian, were detained for “belonging to a terrorist group,” the General Security force said in a statement.

It did not say when they were taken into custody.

Al-Akhbar newspaper reported Tuesday that General Security had thwarted an attack by the Islamic State group in central Beirut, which it said had recruited a Lebanese official in charge of security cameras in the district.

In its statement Wednesday, General Security said the Lebanese suspect had “confessed that he monitored the movements and addresses of political figures and their convoys crossing the city center.”

He had worked with the Palestinian to plan a suicide attack in the centre of the Lebanese capital, it said.

Prime Minister Saad Hariri is a prominent resident of the area. His father, former prime minister Rafiq, was assassinated with a massive car bomb in downtown Beirut in 2005.

The country has been hit by several suicide bombings linked to jihadist groups fighting in neighbouring Syria since war broke out there in 2011.

Some of the most deadly attacks took place in strongholds of Hezbollah, the Shiite movement that is fighting alongside President Bashar al-Assad’s forces.

The last attack carried out in Lebanon was in November 2015.

In June 2016, the army said it had arrested IS fighters who were preparing attacks against various parts of the Lebanese capital.

And on January 21, soldiers arrested a would-be suicide bomber inside a crowded coffee shop in the upscale Hamra neighborhood in west Beirut.