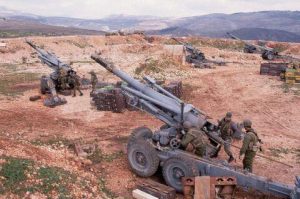 NNA field reporter on Tuesday said that the Lebanese Army has been since morning shelling with heavy artillery locations for terrorists in the highlands of Ras Baalbak.

In the dawn, the army targeted a car for the terrorists loaded with rockets and other weapons in the highlands of Ras Baalbak and Arsal, damaging the car and killing three terrorist members, among them a security senior in Daesh.