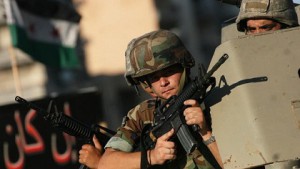 The army intelligence detained two Syrian nationals over links with the Islamic State of Iraq and the Levant (ISIL), the state-run National News Agency reported.

According to NNA, the two ISIL suspects were arrested in the village of Talia in the Bekaa.

A third suspect managed to flee the area with his wife, taking with them identity papers.

The apprehended suspects were identified as Jomaa Ahmed al-Mustafa and his brother Aziz.

On Wednesday, the army arrested nine Syrians on suspicion of their links to terrorist groups.

Several suspected jihadist members have been arrested in recent months throughout Lebanon.