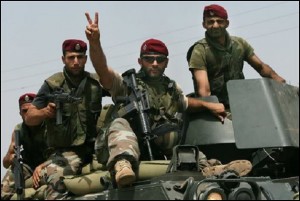 The army has bolstered its security measures on the outskirts of the northeastern border town of Arsal in light of the shelling on Monday that saw the death of eight extremists, reported al-Joumhouria newspaper on Tuesday.

A high-ranking military source confirmed to the daily that the army’s shelling had targeted members of the al-Qaida-affiliated al-Nusra Front.

It also clarified that the military shelled the armed groups with artillery, not helicopters as media reports had speculated.

“The army has bolstered its measures in the area to thwart any attack or ambush by armed groups,” the source added.

The military shells the positions of al-Nusra on Arsal’s outskirts and the Islamic State on Ras Baalbek’s outskirts “on a daily basis,” it explained, adding that Monday’s shelling was “significant” because it incurred a number of casualties among the gunmen’s ranks.

Eight people were killed and many wounded on Monday when the army targeted militant positions along the eastern border with war-torn Syria.

The army frequently shells the militants’ positions in the border area, while Hizbullah fighters have confronted them on the Syrian side.

The border area is also home to informal Syrian refugee camps largely beyond the reach of authorities or aid agencies.

In August 2014, Islamic State and Nusra Front militants seized some 20 Lebanese soldiers and police officers during a brief cross-border raid on the town of Arsal. The extremists have executed four of them and are still holding the rest.