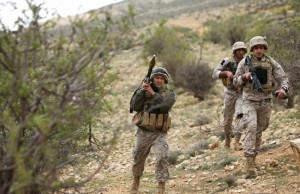 The Lebanese Army said it had arrested during raids in north Lebanon eight individuals, including two high-ranking members of a terrorist group suspected of involvement attacks against the Army in recent years.

An Army statement said that the “exceptional raids” in the Akkar towns of Khirbet Daoud and Doueir Adwiyeh targeted suspects accused of assaulting Lebanese soldiers and carrying out terrorist operations in Lebanon.

Speaking to The Daily Star, a senior Army source said that the detainees were suspected to be involved in some of the explosions and attacks against the Army that took place over the past two years.

“Investigation will reveal if they were planning any future explosions,” the source said.

The raids led to the arrest of First Sgt. Abdul-Monem Mahmoud Khaled, a defected sergeant in the Lebanese Army who is accused of serving as a high-ranking member of an unidentified terrorist organization, the statement said.

The Army also arrested an “emir of a terrorist group,” who was identified as Syrian national Abdel- Monhem Zoghbi, also known as Abu Hureira.

The statement did not disclose whether the two men belonged to ISIS or the Nusra Front.

But the senior Army source explained that Khaled, from the village of Doueir Adwiyeh, announced that he had joined ISIS in a video last October, adding that he had abandoned his Army post before the announcement.

Several Army soldiers declared their “defection” to ISIS or the Nusra Front last October. The phenomenon stopped when the Army crushed militants inspired by the groups in Tripoli the same month.

The source said that Abu Hureira was the head of a terrorist group based in Akkar and loyal to ISIS.

The three relatives are wanted on charges of belonging to terrorist organizations, according to a security source. They are related to Atef Saaededdine, a former Lebanese Army soldier who is wanted on charges of terrorism and desertion after he defected to the Nusra Front in July 2014, the same source added.

In a video posted on the Nusra Front’s official YouTube channel a few days after his disappearance, Atef, who hails from the province of Akkar, shows his Lebanese Army identification card and accuses the armed forces of taking orders from Hezbollah and discriminating against Lebanese Sunnis. Kamel and Khaled are Atef’s cousins, according to the source. Ghaddaf is his brother.

Thursday’s raids also led to the arrest of Syrian nationals Ahmad al-Jalakh, Ousama Hussein and Ibrahim Zoghbi, who are also accused of carrying out terrorist operations and assaulting members of the Lebanese Army.

Thursday’s arrests are the latest in the Army’s crackdown on suspected terrorists in north Lebanon.

The campaign was launched after notorious Islamist militant Osama Mansour and radical preacher Khaled Hoblos were targeted by security forces earlier this month.

According to a security source, more than 30 suspected militants have been apprehended in north Lebanon since Mansour and his partner Ahmad al-Nather were killed in an Internal Security Forces operation in Tripoli last Thursday.

Hoblos and his driver, Amir al-Kirdi, were also arrested during the operation. Investigations into Hoblos uncovered dormant terrorist networks in north Lebanon that were to be armed by the radical preacher before his arrest.

Hoblos, a radical preacher accused of heading an anti-Army militia based in the town of Bhannin, had been pursued by security forces for allegedly orchestrating attacks against the Army.

Both Mansour and Nather had been wanted for taking part in clashes against the Army in Tripoli in October 2014 and were suspected of links to jihadi groups in Syria.

Mansour, who was close to Lebanon’s top Islamist fugitive Shadi Mawlawi, was wanted over plotting several attacks against the Army in Tripoli. He also took part in clashes between the neighborhoods of Bab al-Tabbaneh and Jabal Mohsen.

Mansour and Mawlawi are believed to have links with the Nusra Front, Syria’s Al-Qaeda affiliate.