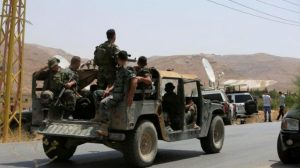 The Lebanese army announced on Tuesday the arrest of two top ISIS commanders in the town of Arsal on the eastern border, seizing a weapons cache that belonged to the organization, which had occupied Lebanese territories in the Ras Baalbak area, adjacent to Syria, like reported by aawsat.com.

The statement added that the two men had participated in the battles against the Lebanese army in Arsa, and planned terrorist attacks through booby-trapped vehicles and explosive devices.

The apprehended Syrian was involved in the explosion of al-Qalamoun Scholars’ Committee headquarters in Arsal and an attack on an army patrol that was heading to inspect the blast.

In a separate statement, the army announced that it had seized in one of the caves in Wadi Rafek, on the outskirts of Ras Baalbek, on the eastern border with Syria, “a depot left by terrorist groups, containing bombs, shells, machine guns, hand grenades and medium and light ammunition.”

The National News Agency said that the weapons were transferred to one of the military barracks in the area, while work on dismantling the bombs was underway since the departure of ISIS militants from the areas.

ISIS militants left the Lebanese territories last August as part of a deal with “Hezbollah” that led to the transportation of the extremists to Syria’s Deir al-Zour, following a similar deal between the group and Al-Nusra Front militants, who were deported to the Syrian province of Idlib.