You are here: Home / Mediterranean / Lebanon and UNIFIL: sailors of peace 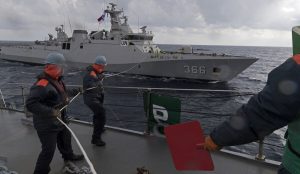 The Maritime Task Force (MTF) of UNIFIL is the first and only naval operation of the UN Peacekeeping globally. For over 13 years six ships, one each from Bangladesh, Brazil, Germany, Greece, Indonesia and Turkey — the task force works in securing Lebanese territorial waters alongside the Lebanese Navy.

The current MTF Flagship “Independência” is from Brazil, which has been in that role since 2011. Its frigate is in charge of commanding all of the Mission’s maritime operations in Lebanon. Its commander, Rear Admiral Sérgio Salgueirinho, says its mission has two major operational objectives:

“One is to assist the Lebanese government to avoid and/or help prevent the entrance of unauthorized weapons or illegal material by sea into Lebanese ports, and two, to assist and contribute to the enhancement and capacity of the Lebanese Armed Forces Navy.”

Most recently, Corvette Barroso served as the flagship vessel until March 2020, when it was replaced by the Independência, with about 200 Brazilian naval peacekeepers.

Working together and in close cooperation with the LAF Navy, MTF has established a reliable control system over the traffic in the Lebanese territorial waters. The main element of it is the so-called “hailing”, which Rear Admiral Salgueirinho describes as one of the most essential components of the MTF mission.

“In simple and symbolic terms, this means that people who navigates and transit in Lebanese waters see us and feel the importance and value of our presence while bringing and maintaining peace and stability at sea,” he emphasized.

Hailing has been a coordinated effort between MTF and LAF Navy units, especially with the Costal Radar Stations.

“Since 2006, more than 100,000 hailing achievements of MTF have been done and more than 14,000 vessels have been referred to the Lebanese authorities for inspection, which means that we are very much present at sea,” he added.

For Salgueirinho, commanding this mission in Lebanon has been both very enriching and eye-opening. His crew agrees.

“South American sea waters are some of the most peaceful seas in the world but navigating in Lebanese waters has been quiet challenging but a fulfilling experience for us,” explained UNIFIL Brazilian Flagship Commanding Officer, Captain Campos Huguenin, while describing how challenging it is to patrol the Lebanese maritime zone.

“Life at sea can be challenging. At sea, you don’t have walls, roads or streets like in land, so when navigating these waters, our mission is to ensure with our Lebanese partners that every ship transiting in and out of Lebanese waters is allowed to be here.”

MTF’s area of maritime operations (5,000 nautical square miles or 17,171 square kilometres) is almost 16 times bigger than the area of UNIFIL area of operations on land in South Lebanon. Therefore, another innovative and essential component of the naval task force is the use of helicopters, which helps patrol the vast maritime area of operationas effectively and rapidly.

“Our heli patrols do the job during two hours at a time. It is faster and can patrol our maritime zone much more quickly,” said UNIFIL MTF Brazilian Helicopter Pilot, Lt. Cdr. Bruno Feitoza.

The impact of COVID-19 on the MTF

For Rear Admiral Salgueirinho, it has been a great honour and professional experience to serve during these difficult times, and when asked about the impact of the COVID-19 pandemic in the daily tasks of the MTF, he said that “COVID-19 still remains a dangerous threat to the personnel belonging to MTF units and also to the people we serve.”

“However, we remain very much alert and continue to comply on a daily basis, with all the preventive measures against the spread of the virus,” he reassured.