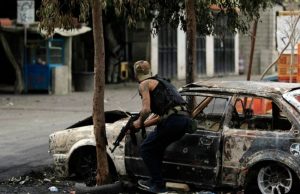 The toll in two days of clashes in a Palestinian refugee camp in Lebanon rose to five, medics said, as local factions worked to implement a security plan.

Clashes erupted in the camp late on Friday as Palestinian factions participating in a joint security force begun deploying throughout the area in the southern city of Sidon.

They came under fire from a Islamic extremist group in part of the camp, prompting clashes that Lebanese and Palestinian medics said have now killed five people and wounded at least 30, mostly civilians.

Among the dead were two civilians, two members of the joint Palestinian security force and one member of the extremist group, the medical sources said.

The fighting has prompted security measures outside the camp, which Lebanese security forces do not enter by long-standing agreement.

An adjacent highway has been cut and patients moved from the Sidon governmental hospital next to the camp.

Palestinian officials in the camp called on Sunday on remaining members of a group led by a local extremist to surrender with their weapons.

And around noon, the intensity of the clashes decreased after earlier fighting that sent clouds of black smoke up from the camp.

Ain al-Hilweh is home to multiple armed factions, and has been plagued by intermittent clashes between them as well as against smaller extremist groups.

Lebanon’s army does not enter Palestinian refugee camps, where security is managed by joint committees of Palestinian factions.

Ain al-Hilweh is home to some 61,000 Palestinians, including 6,000 who have fled the war in Syria. It was established in 1948, to host Palestinians displaced by Israeli forces during the establishment of Israel. Lebanese authorities have paused construction of a concrete barrier around the camp. Fighters armed with assault rifles and truck-mounted rocket-propelled grenades traded fire inside.

Traces of violence spilled beyond the camp’s boundaries, and Lebanon’s authorities closed the highway connecting the city to southern Lebanon. Sidon’s government hospital was struck by a rocket.