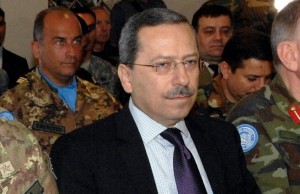 Media reports Thursday said four candidates were front runners for the post of Lebanese Army Intelligence chief, which will become vacant in September when Brig. Gen. Edmond Fadel is set to retire.

The brief report added that Defense Minister Samir Moqbel would chose one of the candidates.

An-Nahar newspaper said that “a fierce competition is going on behind the scenes” over the post, and that a new intelligence chief would be chosen before Aug. 20, one month before Fadel is set to retire.

Daoud and Ghafri, An-Nahar added, were backed by an unnamed “political authority,” while “church authorities” supported the appointment of Helou.

It added that the fourth candidate, Daher, is widely popular among the Army’s rank and file, and is supported by its commander, Gen. Jean Kahwagi.

An-Nahar said the term of Army Chief of Staff Lt. Gen. Walid Salman, scheduled to retire on Aug. 7, is expected to be renewed.

The last two weekly Cabinet sessions were cancelled as a result of the crisis.