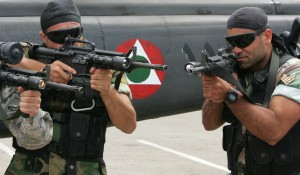 The General Security dismantled an extremist group in the town of Shehim in Iqlim al-Kharroub, comprised of three Syrian nationals, after three years of surveillance, As-Safir newspaper reported Tuesday.

The newspaper identified the three men by their initials, Y.Kh., who is also known as Abu Khattab and Abu Rahmeh, his brother M.Kh., and Z.D., all of whom reside in the village of Shehim.

According to the daily, Abu Khattab left Lebanon in October 2012 for the city of Aleppo in northeast Syria through the northern Lebanese border crossing of Arida to join the ranks of the al-Qaeda affiliated Nusra Front. He later returned to Lebanon through an illegal border crossing in the northern Bekaa Valley.

Abu Khattab was then tasked by Nusra Front to recruit agents in Lebanon and conduct monitoring operations.

The daily said that he managed to recruit and send several Syrians to Turkey to join the Nusra Front.

Abu Khattab allegedly said in his testimony that he monitored suspected Hezbollah-linked Resistance Brigades members in the town of Shehim and revealed their identities to dormant terror cells linked to fugitive radical Salafist preacher Ahmad al-Assir.

The report also said Abu Khattab mediated with Abu Malek al-Talleh, the Nusra Front’s commander for Qalamoun, for the release of one of the policemen taken captive by Nusra Front and ISIS (Daesh) in the northeastern border town of Arsal in August of last year.

The newspaper identified the policeman as Wael Darwish, who is from the town of Shehim.

Five servicemen were released briefly after the two groups captured 24 policemen and soldiers after bloody clashes with the Lebanese army in Arsal last August.

Soldiers Ibrahim Shaaban, Ahmad Ghieh and Darwish along with ISF member Saleh al-Baradei and soldier Mohammad al-Qaderi were turned over to Sheikh Mustapha al-Hujeiri shortly after their capture by the Nusra Front.

The families of 25 Lebanese servicemen still being held hostage by the extremists marked the one-year anniversary of their abduction on August 1.

As-Safir’s report said that Abu Khattab’s brother denied conducting any security activities in Lebanon. However, he did confirm most of the charges against his brother.

Meanwhile, the third suspect admitted that he had links with Abu Khattab, revealing that he was detained by the General Security ahead of his trip to Turkey en route to Syria to join the ranks of the Nusra Front.

The three men are currently being questioned by a military prosecutor, the daily added.

The terror network is reportedly the second to be dismantled by General Security within the last week.

A General Security source told The Daily Star over the weekend that agency foiled a plot by a terror network run by notorious militant Shadi Mawlawi to target Lebanese army posts in the northern city of Tripoli.

The source confirmed that General Security detained at least four of the network’s members, who were set to target an army Intelligence post on Tripoli’s Mutran Street.

Mawlawi is believed to have been hiding in Ain al-Hilweh since he fled Tripoli when the army launched a security crackdown on militants last year. He was charged along with his partner-in-crime Osama Mansour with operating a terrorist group. Mansour was killed in a shootout with police earlier this year.

Mawlawi was sentenced to death in absentia last year on terror charges, and is wanted for his alleged links to the perpetrators of a Jan. 10 double suicide bombing in Jabal Mohsen that killed nine people.