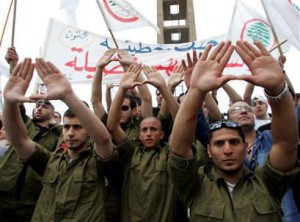 Hundreds of supporters of a Lebanese Christian politician protested in Beirut on Thursday against the Sunni prime minister they claim is marginalising Christian influence, stirring tensions in a country in crisis over war in neighbouring Syria.

Michel Aoun accuses Prime Minister Tammam Salam of taking decisions without cross-party consensus and usurping powers reserved for the president – a post set aside for a Christian but vacant since last year due to the wider political crisis.

Aoun’s critics, including other Christian leaders, say his motivation is personal. A presidential hopeful, he wants his son-in-law, Brigadier-General Shamel Roukoz, appointed as army chief when the job needs filling in September.

Aoun, 80, is an ally of Hezbollah, a powerful Lebanese Shi’ite group backed by Iran that is fighting alongside President Bashar al-Assad in Syria. Hezbollah has said it backs Aoun’s political position, but is not taking part in the rally.

Balance and consensus has kept Lebanon stable since the 1975-1990 civil war but has also frequently led to paralysis. Under the system, the president must be a Maronite Christian, the prime minister a Sunni and the Parliament speaker a Shi’ite.

Supporters of Aoun’s Free Patriotic Movement (FPM) waved its orange flag as groups on foot and in cars honking horns made their way towards the Grand Serail government headquarters in central Beirut, where Salam was holding a cabinet meeting.

The army had blocked roads using armoured vehicles and metal barriers as the protesters chanted and took pictures on their smartphones. Soldiers watched in the shade.

“All parties should agree on laws,” said 21-year-old student Charbel Khoury. “They are taking everything from us. As Christians we should act, we should not stay at home. We are only a small number in the region.”

All of the main political parties, including the Saudi-backed Future Movement of Sunni politician Saad al-Hariri, are represented in the Salam cabinet, which was formed last year after the country spent 10 months without a government.

The government’s existence has spared Lebanon a complete vacuum in the executive arm, helping shield it from further fall-out from the four-year-long Syrian war that has driven more than one million refugees over the border into Lebanon.

Political sources in parties allied to Aoun said his ministers would not resign, even as one of them threatened further escalation. “We will stay in the street until the government is toppled if it continues in this way,” Walid Khoury, an FPM lawmaker, was quoted by local media as saying.

While rivalry between Sunni Saudi Arabia and Shi’ite Iran has helped to fuel conflict in the region, their allies in Lebanon have sought to contain tensions. Hezbollah and Future are holding regular talks to help do that.