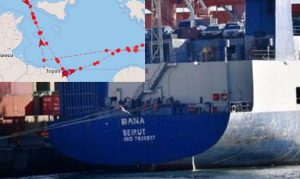 Lebanese car carrier BANA is in detention in Genoa, Italy, since Feb 2, suspect in arms trafficking from Turkey to Libya.

The ship came into light earlier, she was spotted by French Navy in Libyan waters, escorted by Turkish Navy frigates.

Libyan National Army Command issued a statement, accusing the ship in illegal transportation of arms, including tanks and armored cars, from Turkey to Libya.

Ship’s voyages records were tampered with, Italian authorities believe there at least three trips from Turkey to Libya.

All ship’s documentations, including logs and electronic logs, are seized, to be scrutinized.

Reportedly, there was a whistleblower among crew, who tipped off Italian authorities.