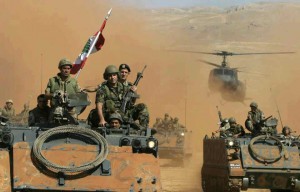 Lebanese Army carried out a number of attacks against the so-called Islamic State of Iraq and Al-Sham (ISIS) in the Ras Al-Ba’albak countryside after the aforementioned terrorist group was reported to have been approaching the Syrian border and Jaroud Al-Qa’a.

According to a military source, the Lebanese Army targeted ISIS’ positions near Ras Al-Ba’albak with heavy artillery; this was followed by a ground assault involving their infantry units.