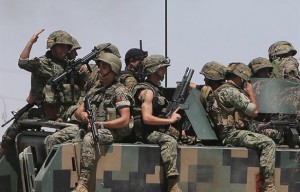 The Lebanese army Tuesday moved to seize control of a strategic hill on the border with Syria overlooking Wadi Rafeq, which jihadi militants frequently used to infilitrate into Lebanon, according to Albawaba.

A security source told The Daily Star an airborne unit advanced into the outskirts of Ras Baalbek at dawn and seized control of the Al-Mkhairimeh hilltop.

The source, however, could not confirm local media reports stating that a number of jihadis were killed or wounded in the operation.

Mkhairimeh is not believed to be occupied by militants, the source added. It is opposite Al-Jarash hilltop, which the Lebanese army seized from militants in a February attack.