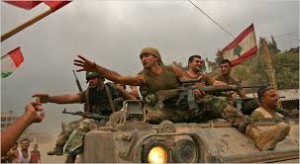 General Security scored a new victory in its battle against terrorism, announcing Thursday the arrest of a prominent ISIS leader and other suspected militants who confessed to plotting bombings and assassinations in the country.

The statement said that General Security, in a surprise operation, arrested Palestinians Z.K., J.K. and A. Kh. over suspicion that they belonged to a terrorist group and were plotting attacks inside Lebanon.

Upon interrogation, J.K. confessed to being the “legitimate leader” of ISIS in the Palestinian refugee camp of Ain al-Hilweh.

He revealed that he, his brother Z.K., A. Kh. and others have formed a terrorist group which receives orders from ISIS.

A security source told The Daily Star that General Security arrested the main suspect in cooperation with the Lebanese Army as he sought to cross into Syria from north Lebanon.

General Security said that Z.K. told interrogators he headed to ISIS’ self-declared capital of Raqqa in northern Syria, where he had met with ISIS leaders to coordinate attacks in Lebanon.

He said an operations room was formed in Ain al-Hilweh with the aim of connecting it with all ISIS cells present in Palestinian refugee camps in Lebanon. Z.K. confessed that the cell was planning to carry out suicide bombings against Lebanese Army posts and checkpoints.

They also prepared for assassinating Lebanese and Palestinian politicians and rigged vehicles to detonate in Beirut’s southern suburbs as residents there marked several occasions, particularly Ashoura. The plot aimed at stirring strife and dealing a blow to coexistence, the statement said.

General Security said the detainees were referred to the relevant judiciary after interrogations were over.

It added that the remaining members of the cell and all others involved were still being pursued.

General Security chief Abbas Ibrahim said later Thursday that as of Friday, more details would be revealed regarding the cell’s plots.

“There is no need to be afraid for Lebanon and its security as long as we are working,” Ibrahim told NBN television. “General Security is determined to confront terrorists present in Lebanon and proof of that is obvious through our daily arrests.” Lebanese security forces have been cracking down on Islamist militants since the outbreak of the Syrian war more than four years ago.

They have made impressive achievements over the past period, arresting key terrorists and foiling a number of plans to carry out explosions and assassinations in the country.

ISIS and rival extremist group the Nusra Front have a presence on Lebanon’s northeastern border, on the outskirts of Arsal.

The two groups overran the town in August 2014 and engaged in deadly clashes with the Lebanese Army, capturing more than 37 soldiers and policemen. Twenty-five of them are still held captive.

Lebanon witnessed a wave of explosions in 2013 and 2014, most targeting Beirut’s southern suburbs and the Bekaa Valley, areas where Hezbollah enjoys wide support.

The attacks were claimed by ISIS and Nusra Front, who said they came in retaliation to Hezbollah’s military intervention in Syria alongside President Bashar Assad.

Meanwhile, army commander Gen. Jean Kahwagi assured the Lebanese that security in Lebanon was under control.

“Security in Lebanon is under control, but the situation would have been better had there been a political agreement and political institutions reactivated,” Kahwagi told a delegation from the Press Federation, headed by its president Aouni Kaaki, at his office at the Defense Ministry.

But Kahwagi warned against the repercussions of developments in Syria, particularly Russia’s military intervention there.