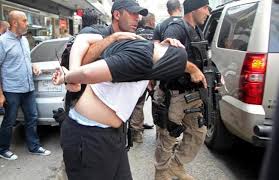 The Lebanese army reports the arrest of three Palestinians linked to the Islamic State, who were building an ISIS cell in the refugee camp of Ain al-Hilweh.

Lebanese Hezbollah’s media operation further stated that one of these men, named Jihad Fadl Kawaash, has confessed under interrogation to being the “legitimate leader” of ISIS affiliates within the camp. He was allegedly planning a series of bombings and assassinations in Lebanon at the time of his arrest.

The Daily Star of Lebanon describes the arrests as “surprise” operations, with Kawaash taken into custody as he was trying to cross into Syria from northern Lebanon. Members of the cell said they had previously met with ISIS leaders in the Islamic State’s capital of Raqqa, Syria, to coordinate terrorist actions in Lebanon.

Disturbingly, the captured terrorists claimed there were ISIS cells in all of the Lebanese Palestinian refugee camps, and they were planning to coordinate suicide bombings against Lebanese Army posts, the assassination of Lebanese and Palestinian politicians, and car bombings in suburban Beirut.

According to the Daily Star, both ISIS and their Syrian rivals, al-Qaeda’s Nusra Front, have a presence in northern Lebanon, and have fought both each other and Hezbollah, the Lebanese terrorist organization currently fighting in Syria on behalf of the Assad regime and its Iranian patrons. Lebanese Army officials warned that increased Hezbollah activity in Syria, under Russian air cover, could lead to retaliation in Lebanon by ISIS and the Nusra Front, but were confident they could deal with such threats.