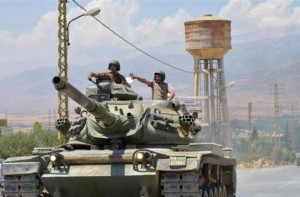 The army targeted the positions of the militants that are close to the outskirts of Ras Baalbek and the northeastern town of Arsal in the Eastern Mountain Range, added NNA.

The militants clash with the army occasionally but a major confrontation erupted in August 2014 when the al-Qaeda affiliate al-Nusra Front overran Arsal in the wake of the arrest of a senior IS leader.

Nineteen soldiers and around 60 militants were killed in the fighting. The jihadists of the two groups also abducted dozens of troops and policemen of which four were eventually executed.

Nusra released in December 16 servicemen in a prisoner swap that released a number of inmates from Lebanese jails.