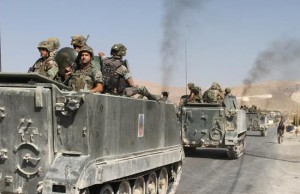 The Lebanese army targeted on Sunday militant posts in the outskirts of the northeastern border town of Arsal, the state-run National News Agency reported.

According to the news agency, troops targeted militants positions and movements with with mortar shells and rocket-propelled grenades.

The NNA said the army’s endeavors are to prevent jihadists from infiltrating into Lebanon.

On Saturday, Hizbullah chief Sayyed Hassan Nasrallah claimed a major achievement in the battle with jihadists in the Syrian border region of Qalamoun.

The Qalamoun region straddles the Syria-Lebanon border and was a stronghold of rebel forces until a major operation by Syrian regime troops backed by Hizbullah fighters last year.

While most of the region was recaptured, opposition militants and jihadists remain entrenched in the area along the porous and ill-defined border.

From there, jihadists have launched attacks inside Lebanon, including in August 2014 when fighters from al-Qaida’s Syria affiliate al-Nusra Front and the Islamic State group briefly overran the Arsal.

As they withdrew from Arsal, the groups took several dozen Lebanese security forces with them as hostages and remained hidden in the town’s outskirts.