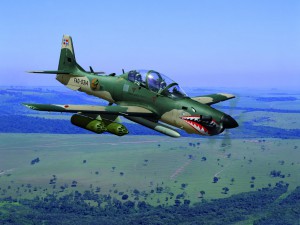 The Republic of Lebanon said it has confirmed the acquisition of six A-29 Super Tucano turboprop aircraft from Embraer Defense & Security and Sierra Nevada Corporation.

The contract includes logistics support for aircraft operation as well as a complete training system for Lebanese Air Force pilots and mechanics. The sale was approved in June by the US State Department.

The aircraft sale is part of a larger, more comprehensive package, including infrastructure improvements, that will be fulfilled by other parties not involved in the Embraer/SNC partnership. The planes, which are currently in operation with 10 Air Forces around the world, will be built in the Jacksonville, Florida.

The A-29 Super Tucano is a durable, versatile and powerful turboprop aircraft capable of carrying out a wide range of light air support (LAS) missions, even operating from unimproved runways. Due to its original concept design, high speed and excellent maneuverability, the Super Tucano is the only aircraft in its class to present superb cockpit visibility, extremely high efficiency and low vulnerability in the close air support role. The blend of advanced, robust and redundant systems allows the aircraft to outmaneuver and outperform nearly any competitor in its class.

Leader in the aerospace and defense industry of Latin America, Embraer Defense & Security offers a complete line of integrated solutions such as C4I (Command, Control, Communication, Computers and Intelligence Center) applications, leading edge technologies in the production of radars, advanced information and communication systems, integrated systems for border monitoring and surveillance, as well as military and government transportation aircraft. With a growing presence on the global market, Embraer Defense & Security products are present in more than 60 countries.