You are here: Home / Mediterranean / Leaked document indicates there may soon be EU military involvement in Libya 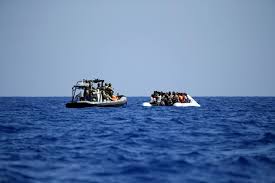 The European Union is planning an extension of its military operation against human traffickers, known as Sophia, which could eventually include sending ground troops to war-torn Libya. According to a confidential document shared with VICE Alps and with Wikileaksby a highly-placed source in a EU member nation, who requested anonymity, the Sophia mission is ready to move into Libyan territorial waters to stop people smugglers there, but it will not do so until it is invited by Libyan authorities.

However, Libya does not have a unified national authority that can extend such an invitation, torn as it is between two rival governments and other armed groups.

The document, a report addressed to the European Union Military Committee as well as the Political and Security Committee and written by the Italian officer commanding the Sophia force, also makes mentions of a “phase 3” of the operation. That may refer to the eventual presence of EU troops in Libya — again, once a national government to work with has been estabilished.

The report by rear admiral Enrico Credendino, dated January 29, explains that the mission has been since last October in phase 2A, using 16 ships and aircraft from various EU nations to stop smugglers in international waters. Credendino calls that mission a success, saying his force has arrested 46 smugglers and destroyed 67 boats. People on the boats are rescued and taken to refugee centers generally located in Italy.

46 smugglers in custody may not seem like a large number in a crisis that has brought almost a million people to Europe last year, but according to the report, the Sophia operation has had a profound effect. Smugglers now choose to transport most people towards the European Union from the east through Greece instead of Libya, where Sophia is focused.

“From a military perspective, I am ready to move to phase 2B in Libyan Territorial Waters,” Credendino wrote in the report. That would mean moving closer to the Libyan coast to arrest smugglers, “but there are a number of political and legal challenges that must be addressed before I can recommend such a transition,” the officer wrote.

Until there is a legal decision on “our powers to apprehend suspected smugglers in Territorial Waters and who will prosecute any suspected smugglers detained there,” the European forces (22 out of 28 EU nations are contributing) will stay out of Libyan waters.

According to the operation’s commander, it’s a question of when, not if, Sophia will move to Libya.

“When Operation SOPHIA progresses into phases 2B and 3, the smugglers will again most likely adapt quickly to the changing situation,” Credendino wrote. “Following the progress of Op SOPHIA into Libyan TTW or onto Libyan soil there will possibly be a greater risk of smugglers trying to counter the operation’s efforts in order to secure in their income from the activity,” he added, indicating that there are indeed plans for a possible move onto Libyan soil.

But the operation cannot do that until it has more ships and aircraft — which Credendino wrote in the report he would request this month — and most of all until there’s a government with the authority to ask the European forces to come to Libya.

Right now there are two rival bodies in the country, resulting from the 2014 election that has followed the toppling of Muammar Ghadafi’s regime in 2011. The internationally-recognized parliament is based in Tobruk, in the east, while the capital Tripoli hosts another one where Islamist factions dominate and which also claims to be the legitimate parliament. Adding to those entities and the forces they control is the Islamic State group, which has existed in Libya since 2014, originally in Derna where local militias pledged allegiance to it, and now in Sirte, a major city which the group now says is its Libyan capital. The United Nations has brokered a peace deal between the two rival parliaments, but a national unity government is nowhere near yet.

According to the EU source, both combating local authorities have said they would not tolerate a possible European operation on Libyan soil.

A way to get an invitation would be, the report said, to offer training for the Libyan Navy and Coast guard, through which “we will be able to give the Libyan authorities something in exchange for their cooperation in tackling the irregular migration issue. This collaboration could represent one of the elements of the EU comprehensive approach to help secure their invitation to operate inside their territory during Phase 2 activities.”

“Moreover, training together during phase 2 could also be a key enabler to build confidence and facilitate the conduct of Phase 3 operations jointly with the Libyan authorities,” Credendino wrote.

The EU source claimed, however, that according to Frontex, the European Union agency in charge of the EU’s external borders, training Libyan naval forces and the local Coast Guard would actually mean training the leaders of the smuggling networks.