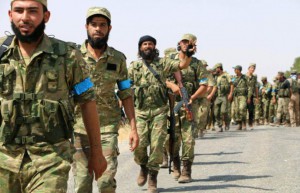 The military commander of Sultan Murad Brigade, a Syrian rebel group supported by Turkey, was killed on Tuesday during clashes with ISIS in the northern countryside of Aleppo.

Ali Sheikh Saleh, aka Abu Ibrahim al-Askeri, was killed by a mine explosion near the Turkmen Barah village in ongoing clashes between ISIS and groups operating under the Euphrates Shield operation, launched with support from the Turkish army on 24 August.

The Sultan Murad Brigade confirmed the death of its commander in a statement on Tuesday.

The Turkmen Sultan Murad Brigade is heavily backed by Turkey. The commander’s two children and wife are based in Turkey’s southern city of Gaziantep, where he was buried on Tuesday, the Turkish Milliyet newspaper reported.

Other Turkish-backed groups such as Nourredin Zenki offered their condolences.

The Euphrates Shield operation, which now entered its 42nd day, is moving towards an operation to take the symbolic town of Dabiq from ISIS, with the support of both Turkey and the United States.

“The coalition is actively supporting [Turkey-backed] Syrian opposition forces as they advance to within a few kilometers of [ISIS’] weakening stronghold Dabiq.” coalition anti-ISIS envoy Brett McGurk said on Sunday.

The village of Turkmen Barah was taken by the Turkey-backed rebels on Tuesday.