You are here: Home / Africa / Leader of Nigeria’s Boko Haram says he is alive in video 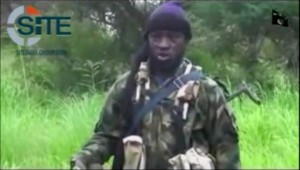 The leader of Nigerian Islamist militant group Boko Haram, Abubakar Shekau, appeared in a video posted on social media on Sunday in which he rejected statements by the country’s military that he had been seriously wounded.

Last month Nigeria’s air force said it had killed senior members of the group which has killed around 15,000 people and displaced more than two million in a seven-year insurgency aimed at creating a state adhering to strict Islamic laws. It said Shekau had been wounded.

“You broadcast the news and published it in your media outlets that you injured me and killed me and here I am,” said a man purporting to be Shekau in a video addressed to “tyrants of Nigeria in particular and the west of Africa in general”.

“I will not get killed until my time comes,” he added, in the 40-minute video posted on YouTube delivered in Arabic and Hausa which is spoken widely in northern Nigeria.

The military has reported Shekau’s death in the past, only to have a man claiming to be him appear later, apparently unharmed, making video statements.

Last month’s announcement by the air force came days after Islamic State, to whom Boko Haram pledged allegiance last year, announced the appointment of a new leader of the West African group in an apparent rejection of Shekau.

That appointment was later dismissed in a 10-minute audio clip on social media by a man purporting to be Shekau, exposing divisions within the jihadist group.