You are here: Home / Mediterranean / Leader of Hamas in Gaza claims he coordinates ‘daily’ with Iran 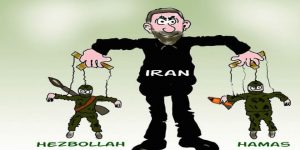 Yahya Al-Sinwar, the Hamas leader in the Gaza Strip, declared that his group is in “daily” contact with both Iran and the Lebanon-based terror group Hezbollah. While the Palestinian government sees Hamas as an ally, both Israel and the United States have labeled it a terrorist organization, like reported by theblaze.com.

Sinwar made the comments on Al-Mayadeen TV.

According to a translation posted by the Washington D.C.-based Middle East Media Research Institute, Sinwar said,

“Our resistance in the Gaza strip has greatly developed its capabilities, first and foremost thanks to Allah, but also with the help of the righteous freemen of our nation — first and foremost the Islamic Republic of Iran, which has provided the Al-Qassam brigades and the other factions of the resistance a lot of money, equipment, and expertise. even before the Israeli aggression, but especially after it. It has provided us a lot of resources which allowed for great development of our capabilities.”

Later in the interview, Sinwar discussed how he was in contact with both Hezbollah and Iran on a daily basis, and that the group’s relations with Iran were “very strong, powerful, and warm.” He specifically mentioned the group’s relationship with Quds leader Qasem Soleimani and “the other brothers in the IRGC [Iranian Revolutionary Guard Corps] leadership.”

The U.S. has openly opposed the IRGC and the Quds Force for years. In 2017, Treasury Secretary Steve Mnuchin accused the IRGC of playing “a central role to Iran becoming the world’s foremost state sponsor of terror.”

The official Twitter account for the Israeli Defense Forces posted a clip from the interview, along with a closed-captioned translation and the words “The mask has been pulled off[.] Hamas is Iran[.] Iran is Hamas[.] The terror along the security fence is an Iranian mission”

This is not the first time that Hamas has made a claim like this. In October, the deputy head of the group vowed that they would continue to maintain close ties with Iran. In August, a Hamas leader claimed that Iran was the group’s single largest source for money and weapons.