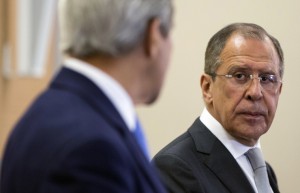 Russian Foreign Minister Sergey Lavrov has told US Secretary of State John Kerry that Moscow had never concealed its supplies of military equipment to Damascus for struggle against terrorism, Russian Foreign Ministry spokesperson Maria Zakharova has told TASS about the telephone conversation Lavrov and Kerry held on September 5.

“In the course of the telephone conversation Kerry asked Lavrov for details about Russian assistance to the Syrian government in the struggle with terrorists. The Russian Foreign Minister confirmed that such assistance had been provided on all occasions and continued to be provided at the moment and that Russia had never made a secret of the supplies of military hardware to the Syrian authorities for struggle against terrorists,” Zakharova said.

“While discussing ways of stepping up the effectiveness of struggle against international terrorism in the region Lavrov addressed Kerry with a reminder that Moscow had repeatedly urged the international coalition to cooperate with the Syrian authorities under the auspices of the United Nations, because the Syrian army was the most effective force confronting the Islamic State and other terrorists.”

“Lavrov drew the US Secretary of State’s attention to a remark by Russian President Vladimir Putin made in Vladivostok to the effect that discussing Russia’s involvement in military operations in Syria was premature for the time being,” Zakharova said.