You are here: Home / Europe / Lavrov says U.S. should cooperate with Syria over Islamic State 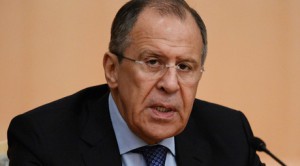 Russian Foreign Minister Sergei Lavrov said the United States should cooperate with Syrian President Bashar al-Assad to fight Islamic State and that this required an international coalition uniting all those for whom the jihadists are “a common enemy.”

Washington currently heads a coalition conducting air strikes on Islamic State in Syria and Iraq and is cooperating with Turkey to provide air cover for rebels inside Syria.

But Moscow has criticized the United States for not working in sync with Syria, an ally of Russia.

In comments to Russia’s state TV published by his ministry on Sunday, Lavrov recounted two meetings with U.S. Secretary of State John Kerry amid the recent intensified high-level diplomatic contacts over Syria and fighting the Sunni jihadis.

“Our American partners and some countries in the region persistently refuse to recognize Assad as a partner, which is rather strange,” Lavrov said.

“Assad was a fully legitimate partner in destroying chemical arms but somehow he is not in fighting terrorism,” the foreign minister said, referring to a chemical disarmament deal brokered by Moscow and Washington earlier in the conflict.

The United States, its regional ally Saudi Arabia as well Syrian opposition and rebel groups they back, say Assad had to go.

They do not want to cooperate with him as it could be seen as legitimizing his position.

Lavrov is due to discuss Syria and Islamic State with Saudi Foreign Minister Adel al-Jubeir in Moscow on Tuesday. The two will also discuss “closer coordination on global energy markets”, the Russian ministry said.

Russia is one of the world’s biggest oil producers and low prices are hurting its budget. Moscow held multiple meetings on that with OPEC members, including Riyadh, but the cartel has focused on defending market share rather than raising the price.

In the comments published on Sunday, Lavrov also said he had told Kerry there was high risk air strikes in Syria could hit the wrong target and aggravate the conflict.

The Russia-proposed coalition, Lavrov said, would “bring together all those already fighting on the ground” who oppose Islamic State. He named the Syrian and Iraqi armies, the Kurds and “the part of the armed opposition that represents Syrians.”

“Instead of settling their scores between one another, first one must deal with the common threat, and then seek to agree on how to live in their own country,” Lavrov said.