You are here: Home / Europe / Lavrov says Russia is ready to cooperate with Kurds against ISIL 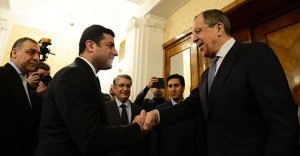 Russia is ready to cooperate closely with Kurds fighting against the Islamic State or Iraq and the Levant (ISIL) in Iraq and Syria, Russian Foreign Minister Sergei Lavrov told the co-leader of a Turkish opposition party during a meeting in Moscow on Dec. 23.

“We know that there are Iraqi and Syrian Kurds among those who on the ground are resisting the threat from the Islamic State [ISIL] and other extremist groups with weapons in their hands,” Reuters quoted Lavrov as saying.

Lavrov told Demirtaş that Russia would “take into account” his party’s “assessments” regarding the situation in Syria.

Western backing for Kurdish fighters in Syria and Iraq is a sensitive issue for Ankara, which is fighting militants of the outlawed Kurdistan Workers’ Party (PKK) based in the mountains of northern Iraq with airstrikes.

Media reports quoted Demirtaş before the visit as saying he wanted to open a representative office for his party in Moscow.

But Russia’s Interfax news agency quoted a Russian diplomatic source as saying that under the law, the HDP cannot open an office in Russia, though it could still be represented by a private person or a nongovernment organization.

Russia imposed economic sanctions on Turkey after the Nov. 24 incident, during which Turkish jets downed a Russian Su-24 warplane on its border with Syria on the grounds of airspace violation, and sharply criticized Turkey.

“We criticized the actions of the government when the Russian plane was shot down,” Russian news agencies quoted Demirtaş as telling Lavrov.

“From the very first days, we declared, as an opposition party in the country, that we do not support the position of worsening relations with Russia,” said Demirtaş, who heads Turkey’s leading political party focusing on the Kurdish problem.