Man talks of enemies of Isis and says to expect something that will ‘make them forget September 11 and Paris’. 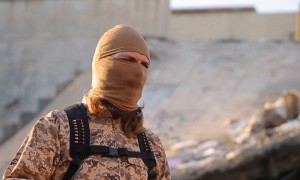 A blond-haired Frenchman has appeared in the latest Islamic State execution video threatening new terrorist attacks in the west.

The man, whose eyes are uncovered but whose features and hair can be seen through a pale balaclava, is then shown shooting in the head a man accused of being a spy. Four other Isis jihadis each shoot another prisoner. The Frenchman is dressed in camouflage fatigues and the others are in black.

He talks in French of the enemies of Isis and tells them to expect something that will “make them forget September 11 and Paris”. He also speaks of Spain and Portugal and states that Isis is seeking the return of Al-Andalus – the name of the Iberian peninsula dominated by Muslims between the 8th and 15th centuries – and the cities of Toledo and Cordoba.

The eight-minute video, thought to have been filmed in northern Iraq, showed the five prisoners speaking in Arabic.

The terrorist in the film is not the first presumed French convert to feature in Isis propaganda. In 2014, Maxime Hauchard, a French citizen from Normandy who converted to Islam at the age of 17 and then became radicalised, was identified from a video showing the remains of the American hostage Peter Kassig.

France is still reeling from the fact that most of those who perpetrated terrorist attacks in the country last year – including the series of attacks in January 2015 on the satirical publication Charlie Hebdo and the November shootings and suicide bombings – were French citizens.