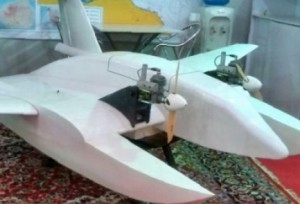 Iran unveiled photos of a new line of suicide drones. According to Iranian news agency Tasnim, the drone will primarily be used by the regime’s Revolutionary Guard for maritime surveillance, but has the capability of carrying bombs for “suicide missions.”

The drone can allegedly fly for four hours and cover over 620 miles, according to the Iranian news agency. The aircraft can reach heights of 3,000 feet and as low as 2 feet above ground or water. Even though the drone was photographed, no video was shown of the drone in flight.

The Islamic Republic of Iran had declared that it successfully reverse-engineered an American RQ-Sentinel 170 drone earlier this month, calling the copy Saegheh, or “Thunderbolt.” One of the American drones crashed on Iranian territory in December, 2011 due to technical difficulties, according to American sources.