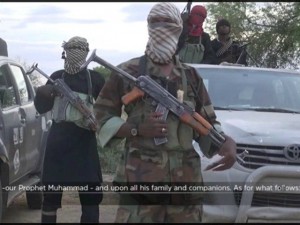 Recent videos from Nigerian terrorist group Boko Haram may suggest that its leadership is divided over their professed loyalty to the Islamic State of Iraq and Syria.

On June 2, Boko Haram released a video titled “Arrival of the Soldiers of the Caliphate in West Africa.” The video is of a high production quality and bears some of the markings of a video produced by ISIS. However, the video does not mention Abubakar Shekau, leader of Boko Haram, or Abu Bakr al-Baghdadi, self-declared “caliph” of ISIS.

Some analysts believe that this is a sign that certain factions within Boko Haram agree with the idea of the reformation of an Islamic caliphate, but do not want to be beholden to a foreign Middle Eastern caliph.

Certain factions within Boko Haram, such as the group Ansaru, believe that the current leadership has taken on a more extremist tone than the terror network’s founder, Muhammad Yusuf. According to Ansaru literature, current Boko Haram tactics border on the “inhumane.”

According to Jacob Zenn, one of the aforementioned analysts, certain aspects of the June 2 video are also hallmarks of Ansaru videos, such as the display of ID cards of Nigerian soldiers killed by militants.

The growing factionalism within Boko Haram may spell trouble for ISIS’s African ambitions.

Boko Haram is perhaps best known for their dramatic kidnapping of 276 schoolgirls in 2014. ISIS militants defended their kidnapping and subsequent enslavement of Yazidi children that same year by claiming the Boko Haram kidnapping as a precedent.

Boko Haram was founded in 2002 by radical Islamists who believed that interaction with the West, especially Western-style education, ought to be forbidden. Their official Arabic name roughly translates to “People Committed to the Propagation of the Prophet’s Teachings and Jihad.”

The group first initiated militant activity in 2009 and was formally declared a terrorist organization by the United States in 2013. At the height of their power, Boko Haram militants controlled significant areas of Nigeria. Now, however, government forces have pushed them back and reclaimed much of that land.

By November 2014, Boko Haram propaganda made it seem as though the terror group had aligned with ISIS. Their leader was featured in a propaganda video wearing the traditional robes of an imam, announcing the formation of an Islamic state—much like al-Baghdadi wore when he announce the formation of his caliphate.

In February of 2015, ISIS officially announced that Boko Haram swore loyalty to their caliphate, and that they would be sending high-ranking terrorists to Nigeria to advise and assist Boko Haram.

After ISIS accepted Boko Haram’s pledge of allegiance, the stream of videos and tweets began slowing. After a video released in April, no new videos were released by Boko Haram, possibly due to the counterinsurgency efforts undertaken by Nigeria’s military. The group renamed itself officially the Islamic State West Africa Province.

This latest video suggests factionalism may be splitting the group, and that could throw a wrench in any plans ISIS has for Nigeria.