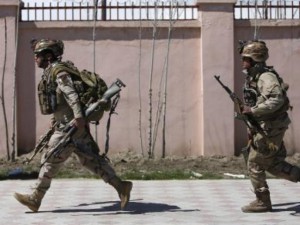 Two gunmen are believed to be holed up in a Lashkar Gah mosque in Helmand province and have taken an unknown number of people hostage.

According to officials, the gunmen are believed to have entered the mosque wearing police uniforms. Their target was apparently an Ulema Council Meeting.

Officials say the total dead and wounded is 16 but a breakdown in figures has not yet been released. However, hospital officials say at least two policemen have so far been killed.