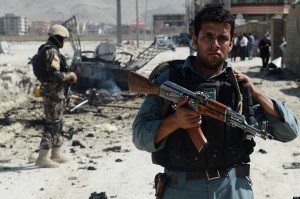 A car bomb exploded near the entrance to Kabul airport and casualties are feared, officials said on Monday, days after series of suicide attacks in the Afghan capital killed dozens and wounded hundreds.

A security official at the scene said the suicide attack appeared to be aimed at two armored cars, although it was not clear who was in the vehicles.

Kabul was already on high alert before the blast following last week’s attacks which killed at least 50 civilians and security forces personnel in the worst violence seen in the city in years.